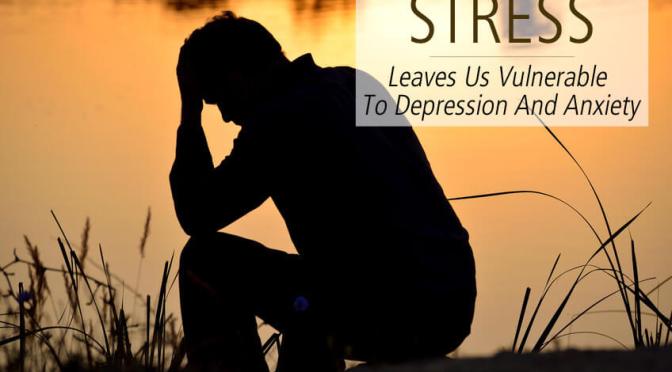 Stress is good for you. It keeps you alert, motivated and primed to respond to danger. As anyone who has faced a work deadline or competed in a sport knows, stress mobilizes the body to respond, improving performance. Yet too much stress or chronic stress may lead to major depression in susceptible people.

Depression is stressful and stress contributes to depression. Stress induced cortisol expression and depression are related events that lead to reduced serotonin levels, the major neurotransmitter involved in the development and progress of depression. High cortisol levels may not directly cause depression, but it may exacerbate a minor condition to a major syndrome. The brains of human suicide patients show extremely high levels of Corticotropin Releasing Factor (CRF), the precursor of cortisol and causes expansion of the adrenal glands.

The presence of cortisol in the blood undergoes diurnal variation, with levels peaking in the early morning and reaching its lowest level at about midnight or three to five hours after the onset of sleep. A changed pattern of serum cortisol levels has been found in people with major depressive disorders.

Once you’ve had stress sufficient to cause a protracted increase of your cortisol levels, your cortisol system is damaged and in the future, it will not readily turn off once it has been activated, as such, recurrent episodes of depression break free of situational triggers and leads to automatic triggers of episodes.

Beyond a certain point, depression becomes random and endogenous; dissociated from life events. At this point, an episode does not occur due to triggers by external stimuli, but altered biochemistry. This emphasizes the need for people with recurrent depression to stay on medication permanently.

Targeting cortisol as a treatment option is a viable idea but still under investigation due to its side effects and role in other biological events (fight-or-flight responses, adrenal energy, anti-inflammatory action, decision making and resolution, immune system activation among others).

Music therapy although not effective at all times can reduce cortisol levels in certain situations. Massage therapy, laughing, and the experience of humour can lower cortisol levels. Regular dancing has been shown to lead to significant decreases in salivary cortisol concentrations.

Once someone is in the grip of major depression, it’s usually not the best time to make lifestyle changes. But you can guard against a reoccurrence of depression or help protect against the first episode of depression by adopting lifestyle changes that modify the body’s stress response. Building resilience is particularly important if you are experiencing chronic stress.

If you’re depressed, seek help. You can’t beat it on your own.

2 thoughts on “The stress of depression”